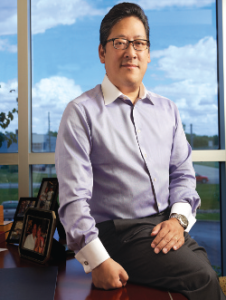 You are never too old or too experienced that your first priority shouldn’t be to learn.

“Success isn’t defined by who has the biggest office or title; success is being able to contribute through your personal and professional experiences,” says Sam. “It’s being able to give at a greater level than others expect, or even of what you expect of yourself. That belief will challenge you to raise your expectations and constantly improve the level of your craft.

“I am a third generation Japanese-American. During the 1940s my grandparents’ loyalty to this country was challenged by the US government and they were interned, along with my father, who was 15, his siblings, and my mother. At 17, my father joined the military along with his siblings. His generation believed that it was their duty to defend the US, further proving they were American citizens even though they were born in this country.

“When World War II ended, my father came back from overseas and entered college. Being an American citizen of Asian descent made it difficult to get a job, and even though he graduated from college with a degree in engineering, he took odd jobs for a while. He taught us that at the end of the day, life isn’t always fair. He believed it was his duty to do something about that, not complain. He centered my siblings and me to be honest and good for our word, teaching us about commitment and hard work, and that things don’t come easy. Though he has passed away, he remains that voice in my head every day that reminds me to do a little bit more professionally and personally, strive to help others and not necessarily have to be the one to take credit. Humility for his generation was a badge of honor.”

That strong grounding has helped Sam throughout his personal life and career through his current position as President of Finish Line Brand, which he accepted in August 2010. The company is a premium retailer of athletic shoes, apparel and accessories that operates more than 640 stores in malls across the United States and employs more than 11,000 associates. Sam joined the company in 2007 as Executive Vice President and Chief Merchandising Officer. A retail veteran, his career includes 22 years at Nordstrom, Inc., where he last served as Vice President and Corporate Merchandise Manager for the Men’s Shoes Division.

Be in a hurry to learn, not to lead

“In addition to my family, there are a number of individuals who have had an impact on my life. Advice from John Whitacre, former chairman and CEO of Nordstrom, has stuck with me: ‘You are never too old or too experienced that your fist priority shouldn’t be to learn.’

“One of my mentors at Nordstrom always signed off correspondence with ‘keep it simple.’ At the time, his message struck me as a little humorous, but as I’ve grown professionally and personally, I’ve come to realize that the simpler you keep things, the easier it is to execute flawlessly.

“My advice for young people starting out in the workplace centers around the lessons I’ve learned throughout my life:

“I stand for honesty, commitment, hard work, and candid and transparent communication, which ultimately fosters teamwork and leads to others’ success. If you are good for your word, you will be known as a trusted leader whom people count on because they know you will always follow through on commitments. Your actions and behavior will inspire others, and that is how your leadership will be defined. If you are directed by this compass, you will discover that things have a tendency to work out.”