“No one has the right to define who you are but yourself.” 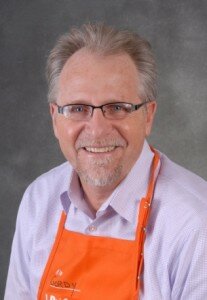 “I guess you could say I’ve been in retail since age 4,” says Gordon, who has been a senior vice president at Home Depot since 2007. “I remember walking two blocks to the retail store my dad worked at to pick him up for dinner every night. When I was ten, I would go downtown to the store where he was a general manager. I got an early taste of merchandising…pricing items on end-caps and marking cost and retail prices.”

Gordon graduated from Brigham Young University with the intention to go on to law school, but after accepting an invitation to work with his dad, he stayed in retail and never looked back. Prior to joining Home Depot, he was CEO of Smith & Hawken, a $200 million outdoor living subsidiary of Scotts Miracle-Gro. Before that he spent ten years at Wal-Mart Stores, Inc., where he was senior vice president and general merchandise manager. He also previously held executive positions with Ernst Home and Nursery for 21 years.

“I’ve had an amazing career and the chance to work for some great companies,” says Gordon. “I’ve been fortunate to have mentors and advisors who helped me along the way, and some who looked me in the eye and bluntly told me, ‘Look, this is what you have to do.’ But the most important advice I received came from my dad, E. Ron Erickson. We called him ‘ER.’ He was a COO who ran a big drug chain that he and his partner started from two stores and grew into a conglomerate of more than 1000 stores. I had the opportunity to grow up in that business and had a great mentor in him.

“He instilled in me the philosophy that no one has the right to define who you are but yourself. I’ve chosen to define myself differently from how others saw me, and I’ve done things others said I couldn’t. If I listened to my high school counselor, I wouldn’t be doing what I’m doing today. People can’t really define who you are by just looking at one set of circumstances. Only you see the whole picture.

“I remember my first year at a former company. I kept suggesting new ideas and different ways to do things. I was told my ideas wouldn’t work. Instead of giving up, I kept pressing forward and, sure enough, accomplished those ideas. One of my greatest satisfactions is doing the very things people say I can’t do.”

The Attitude to Live By

Gordon shares the advice that has served him well and shaped the attitude he lives by:

“And, most importantly,” says Gordon, “Stay curious and courageous. Fear is the greatest de-motivator. Don’t be afraid to be curious. Volunteer for a task no one else wants to do and then go figure out how to do it. Talk to others, do the research, do the hard work, and you will grow tenfold. Look around the corner and explore how to do things better. I have the same curiosity I had 25 years ago. If you are courageous and act on your curiosity, you are bound to learn something!”

Gordon recommends John Maxwell’s Becoming a Person of Influence and Failing Forward as a book leaders should read.

6 Tips for Re-Entering the Workforce

7 Ways to Deal With a Toxic Co-Worker